Since I had gotten my Pan Pacific Privileges for Diners (PPPD) card, it was time for me to make full use of it! I made a reservation for 2 people(my gf and I), for 1830hrs and we requested for good seats. We were late for the reservation, as usual, due to the fact that I had to send my car's sideskirt for respraying (That's another story altogether). The nice people at Hai Tien Lo actually kept the reservation for me and even called and smsed me to remind me of it. A nice gesture on their part I feel.

We were greeted right from the moment the lift doors opened and were ushered to our seats, which I must admit, was one of the best seats in the house, one which overlooked the harbour as well as Sheares bridge. It was really a pretty sight, especially when you are 37 stories high and with all the twinkling night lights from the city below.

We ordered the set menu 3, which @ $58+++ per pax, was one of the cheaper packages available. There was a BBQ platter, shark's fin soup with crab meat, Canadian cod with mango and strawberry, homemade tofu with mushrooms and abalone and bird's nest with sago. We ordered an addtional Peking duck skin with pan fried foie gras, which was $16+++ per pax. (Please note that each of these dishes come in individual servings)

The BBQ platter came first and it consisted of Char Siew, roast duck and spicy jellyfish. I was pretty impressed by the succulent and juicy Char Siew, but the roast duck was just slightly above average. The spicy jellyfish didn't attract me as well as I simply don't like eating jellyfish. Next up was the Peking Duck skin with foie gras. This is definitely a must try! The peking duck skin had a little meat stuck onto it and had no fat at all. It was crisp and tasty and ranks up there with the Peking Duck from Min Jiang(Review coming soon). The pan fried foie gras was nicely done, a little crispy on the outside and soft and quivery on the inside. (God, its a miracle anyone can survive the high cholesterol)Following which was the shark's fin soup. I found it a little too flavourful for my liking, but my gf swears by it. It came with this little beancurd bag that was stuffed with real crab meat and other good stuff. The home made beancurd with mushroom and abalone was next on the list and I personally like the soft and smooth tofu. I was hoping that I could get another serving of it, but alas! The abalone was quite sizeable and though not top grade, it was good. The mushroom was a little too soft and chewy for my liking. (Reminded me a little of eating kway). The highlight of the day was the Canadian cod with mango and strawberries(I don't remember the name of the dish, but the cod comes with diced mangoes and strawberries) It was a pretty weird combination to say the least, but imagine my surprise when the dish actually tasted good. The cod was soft and flavourful and the accompanying sauce was a little sweet. Add the sweetness of the mangoes and strawberries and you get something sweet yet subtle. Dessert followed, but it was nothing fantastic. There were only a few strands of bird's nest and it was essentially mango with sago. An anti climax really, after all the top notch dishes that preceeded it.

The damage? Pretty steep @ $177 inclusive of tax etc. After a 50% discount on the food itself, I still had to fork out just over a hundered dollars. The dishes are quite small, but add them all up and you will be surprised how full you'll be. Its a very romantic place to bring your date, especially if you manage to get harbour view seats. However I do feel that the tables are a wee bit too close to each other. The service is impeccable and staff are patient and polite. Overall, I feel that its money well spent. (Not too often though) Try out the weekly promotion menus if you have spare cash to burn. Its well worth it. 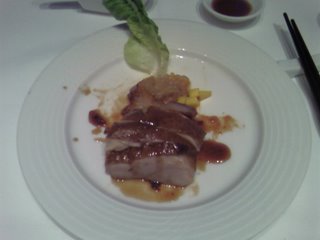 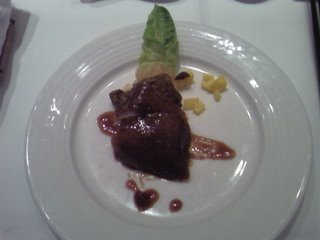 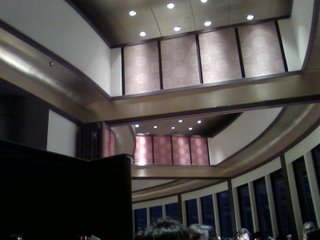 The interior of Hai Tien Lo 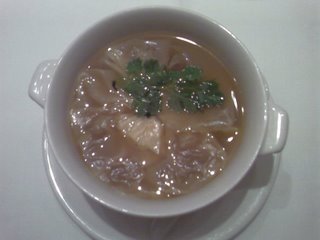 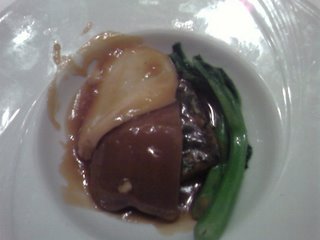 Home made beancurd with abalone and mushroom 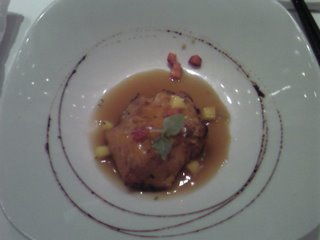 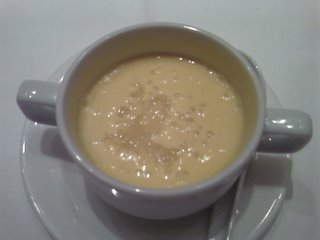 Mango and sago with bird's nest 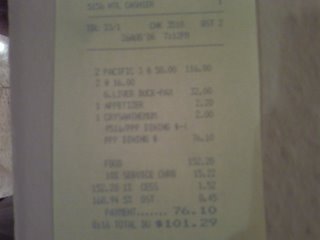 Guess where we went after dinner? Hehe. 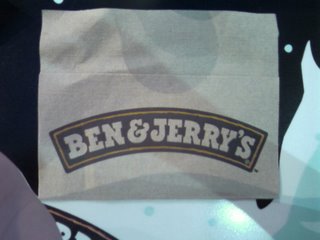