There was a craving for teochew food once again in my family and it was down to Guan Hin and Hung Kang. The vote was settled in favour of Hung Kang and so Hung Kang it was.(The OCBC card promotion weighted in favour of Hung Kang, giving us an extra reason to visit) Hung Kang has been around since 1962(I think) and has achieved iconic status in the minds of many older generation Teochews. Located at North Canal Road below one of the buildings, it is pretty obscure and though facing the main road, doesn't warrant a second glance. According to my dad, it is famous for its braised goose, steamed promfet and sea cucumber.

Well, we got there about 1915hrs and managed to get a nice table beside the fish tank. The place was quite small and seemed to be newly renovated, with traditional teochew music playing in the background. There were only about 10 tables in total but only about 5-6 tables were occupied. We had the OCBC promotional menu @ $138+++ for 4 pax, which included braised goose, shark's fin soup, steamed promfet, cabbage with dried scallops and caramelised yam sticks, served in that order.

For appetisers, we were served a small bowl of radish seasoned with vinegar, sugar and mixed with black bean and a little chilli. It is an excellent cleanser as it cleans your taste buds and perks you up. However, I found it too salty and sourish for my liking. My folks liked it though. To wash it down, concentrated chinese tea was served in tiny porcelain tea cups. Good tea is supposed to leave your tongue with a feeling of dryness (The Chinese call it "Siap") and the tea served certainly fit the bill.

Next up were the main courses. The braised goose was simply marvellous and I will not hesitate to recommend that it be on every patron's ordering list! The goose was served with shredded blue ginger, tau pok(dried beancurd I think), beancurd and mei chye(sorry I don't know the english name for it) - the original teochew style. The meat was slightly rough and went very well with the blue ginger. The beancurd was surprisingly soft throughout(Usually braised beancurd tend to be harder on the exterior) and it sort of slithered down your throat. The braised goose even beats the one I had at Guan Hin. A pity that the portions were quite small and left us craving for more. The sharksfin soup was served in a claypot atop a small flame to keep it warm. Portion was huge and I could actually see the fins. Though not top grade fins, it was pleasently nice and blended with the not too starchy soup. The steamed promfet was unlike the palm sized ones you see at the market. It was huge, more like frying pan sized(medium ones of course)and looked like it was meant for 6-8 people, not 4.(Huge promfets are expensive by the way) The flesh was soft, tender and "sweet", but I suspect that alot of Monosodium Glutamate(MSG) went into the gravy.

Things pretty much went downhill after that. The cabbage with dried scallops was a little too mushed up and soggy for my liking. The gravy was also too starchy and too much of it made me nauseous. The dessert was equally bad. It was essentially strips of yam with seaseme, orange peel, pumpkin and Kng Cai(some kind of herb)covered with a layer of caramelised sugar. We had originally wanted to change it to Orh Nee (Yam paste), but was advised by the staff that this dish was a much more difficult dish to make than Orh Nee and was made specially for the OCBC promotion. So we thought we would just try it out. Wrong move! The yam tasted hard and very sweet. Throw in the taste of the orange peel and the kng cai and you get a very confused mixture of tastes. I would stop short of calling it gross, but you can imagine how bad it was.

Total bill came up to about $156/-, which I feel is a tad expensive considering the quality and variety of the food. Service was prompt, but not really friendly. I would have enjoyed the dinner better if Hung Kang had reduced the portion of the shark's fin soup and fish and added other dishes to the menu. If you like teochew food, do try it, especially the braised goose. Prices for the ala carte menu shouldn't exceed $30 per head for a satisfying 3 course dinner plus dessert for 2. I believe Hung Kang has much more to offer like the sea cucumber, Hei Zor(prawn paste balls I think) and I will definitely be back for more. Ala Carte of course ;-)
Bon-Appétit! 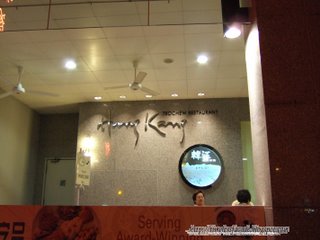 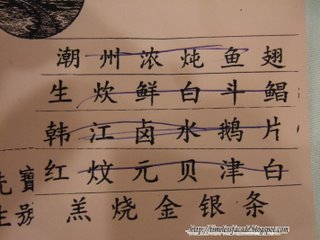 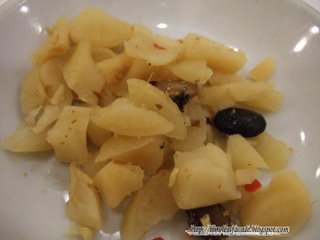 Radish seasoned in vinegar and sugar 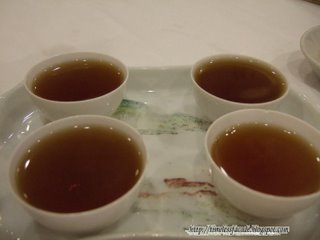 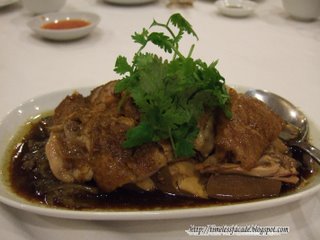 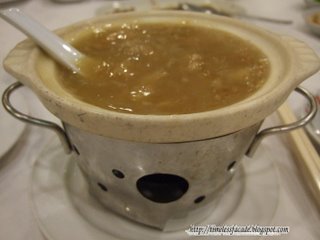 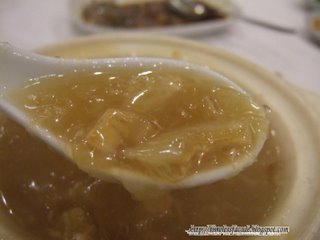 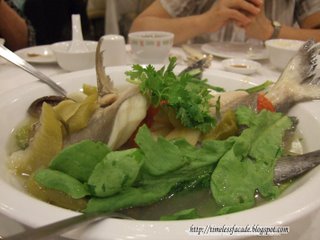 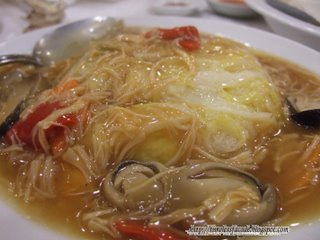 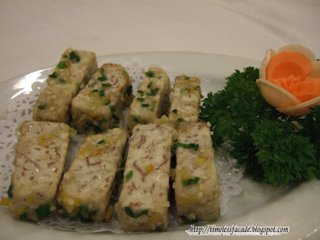 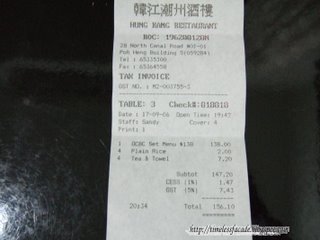