Teppanyaki is usually tagged with the notion of high prices, save for those wannabes you would find at certain foodcourts and even then, those aren't exactly cheap. Enter the teppanyaki stall at Serangoon Gardens Market, which serves only Teppanyaki.(Foolish me forgot to commit the stall name to memory) It isn't really a Teppanyaki stall per se, as the chef cooks your order prior to serving it to you on a hot plate and you don’t get the privilege of watching him whip up your order. My gf and I both ordered the Garlic Chicken set which consisted of a miso soup, rice, beansprouts, a sunny side up and of course the garlic chicken.

The miso soup was not too salty and didn’t leave any powdery residue on my tongue, unlike so many other miso soups that that are straight out of sachets and served at outlets like Yoshinoya, Sakae Sushi etc. (It might simply be a watered down version) The beansprouts were cooked just right, not too raw and not too soggy. The garlic chicken was cooked nicely, with golden brown pan- fried chopped garlic sprinkled over it. The skin was crispy and the accompanying gravy lent it a slightly salty taste. Strangely enough, the garlic smell wasn’t too evident. The cost? $4.80/-. Well worth the price. Try it to believe.

After our teppanyaki, I ordered a plate of Roti John with chicken from the famous Shukor stall, which used to be from the old Taman Serasi food centre. The bread was nice and soft (all thanks to the oil) The egg with chicken wasn’t too salty and tasted a little like normal fried eggs with chicken. Put the bread and the chicken together and you essentially get an egg and chicken sandwich! Actually it isn’t as bad as I make it out to be. It actually tastes better then a lot of egg and chicken sandwiches that I’ve eaten, just that the price tag of $3.50/- doesn’t really justify it. Do try it at least once though.

If you do visit Serangoon Gardens Food Centre, do try out the duck rice and the pig organ soup as well. Simply yummylicious! Oh and yes, don't forget the kway chup. :-)

Some pictures of my dinner to whet your appetite. 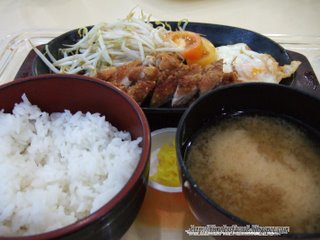 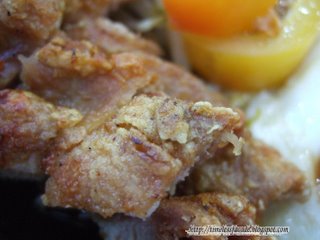 Close up of the chicken 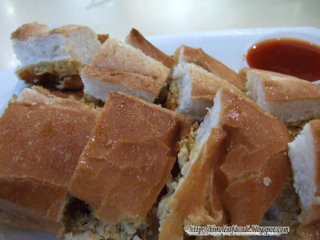 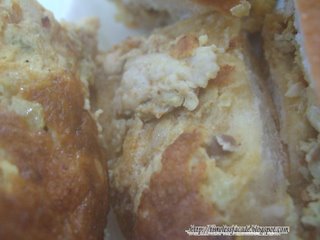 Do you know if there is a cake shop in Serangoon Gardens? Not in the food centre tho. Think it is a pretty old cake shop. They sell good muffins.

old cake shop in serangoon gardens that sells nice muffins? Not that I know of actually.

Thanks. IF i find the confectionery, shall let u know. Now, I have to think of where i can get a nice b'day cake and book a chinese restaurant. Got recommendations..;)

Maybe you can try Hillman restaurant at Jln Besar? =)

I will check it out. Thanks. U have any reviews for that? Is it a quiet place? Cos forgot to add in criteria that place must be conducive for conversation - not too quiet but can't be like marketplace. BTW, any recommendatiosn for good cake shop? really tap on u...hee thanks!

Yup. You can do a search for it under hillman =)

Cake shops? Not too sure actually. I've only bought cakes from Lana, Awfully Chocolate, The Patissiere and little foot =)