Its the season to go mad over food again, with the World Food Fair 2006 being hosted at Singapore Expo. Being a true blue foodie(actually just being greedy), I decided to check it out with my gf. I shall not say much about the traffic, except that it was bad and parking was a huge problem. Squeezing was also the order of the day and an indispensible part of trying to get from one food stall to another.

Well, down to food. There were quite a number of stalls selling food items ranging from frozen food to nutrition products to snacks, with the odd financial planning and magazine booths(Isn't this supposed to be a food fair?) I tried quite a few stalls, but left out the Peking duck and Bao stall as they were really madly packed with people and I didn't fancy waiting like 25 mins for my food. However, I did try the following: 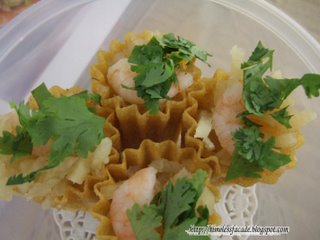 The Kueh Pie Tee cup was nice and crispy, with a slightly milky taste. The filling was normal, but the parsley added an extra oomph to it. 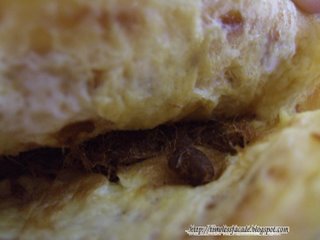 Prata with egg and meat floss

I know this looks kind of gross, but it's not bad actually. The meat floss went well with the egg and prata. However, the prata tasted like those frozen prata you could buy from NTUC. 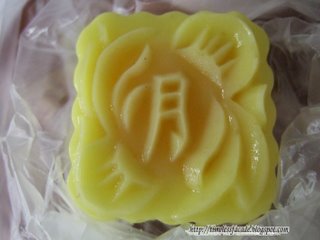 This is something interesting. Never tried it before. Very refreshing taste of mango with the sweetness of Agar Agar. Nice and light. 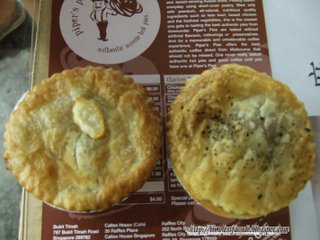 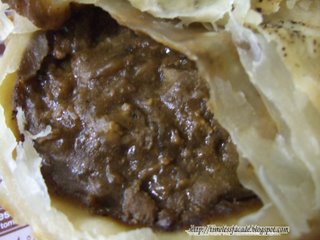 A peek into the Piper's Special

This is the highlight of the day. The chicken with mushroom pie has enough chunky chicken and mushrooms in it to keep the blues away. The crust is flaky yet firm and went well with the filling. The Piper's special was equally good, with beef gravy and chunky steak within. Served piping hot, it was really irresistable. 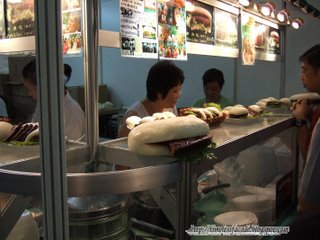 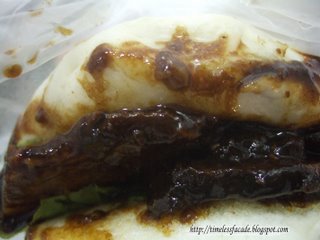 The Kong Ba Pau was quite a size and the meat was nice and not too fatty(although that kind of defeats the purpose of eating Kung Ba Pau). The pau itself was chewy and soft, but nothing to shout about. 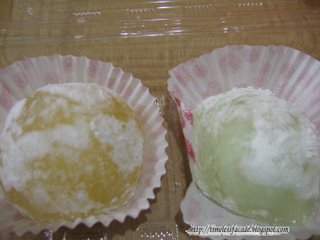 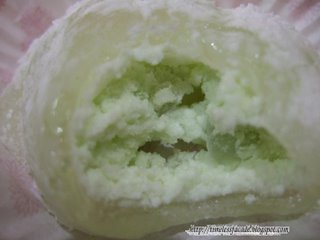 This is something you would usually find in the supermarket, marketed as FROM JAPAN, so I was a little surprised to learn that this one came from Taiwan. Had 2 of them, the peach Mochi and the honeydew Mochi. Both came out straight from the fridge and was cold. The peach one didn't really have a strong peach taste. The honeydew one was notably better. It was refreshing and just like eating the real thing, albeit with a starchy and chew skin. One thing I didn't like about both Mochis was the fact that there was too much flour on them, which made my tongue rather uncomfortable. 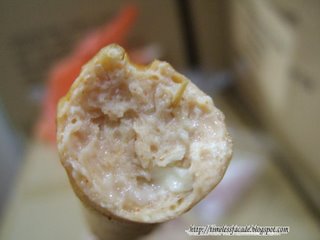 An old time favourite and also my gf's favourite. The cheese taste was strong but not overwhelming. Simple yet good. Much better then the cheese sausages you get from NTUC or Cold Storage. 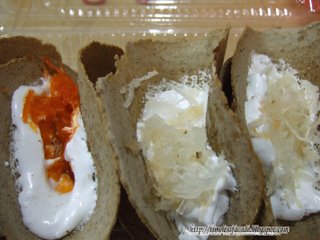 Used to eat these at Cairnhill hotel for high tea when I was a kid. Got really excited when I saw these on sale. The pancake has just the right amount of sweetness, just that it tastes a little burnt. (Maybe its the batter problem) The coconut filling was a little too sweet for my liking as well.

Well that sort of rounds up my visit to the food fair. Go visit while it's still here. If you are lazy and don't want to go, but want to know where to get the foods that I've tried, drop me an email or message in my cbox and I'll tell you ;)
Happy makaning!

Email ThisBlogThis!Share to TwitterShare to FacebookShare to Pinterest
Labels: misc