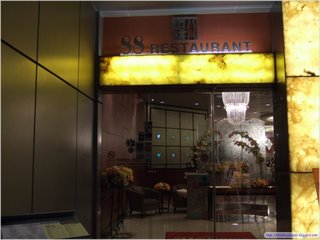 My gf and I spent the day exploring the newly open Vivo City and decided to have dinner at 88 Restaurant @ Harbourfront Tower 2 after looking through their promotional menu. At $19.80+++ per pax for a 6-course dinner, it seemed like a pretty good deal. The set menu included Chilled Homemade Beancurd with Tobiko and California Maki Combination, Braised Shark's Fin Soup with Crab Meat, Sweet and Sour Chilli King Prawns, Sautéed Salmon Fillet with Teriyaki Sauce, Braised Ee Fu Noodles with Dried Sole Fish and Cream of Red Bean with Gingko Nuts.

The interior of the restaurant was similar to that of a ballroom, with its high ceilings and hanging chandeliers. The wait staffs were prompt and efficient, though they were less inclined to conversations. For a Monday night, it had quite a lot of customers. About half the restaurant was filled by about 1930hrs.

The chilled homemade tofu was essentially a heart shaped egg tofu with a sprinkling of century egg and roe on top. Tasted like chilled egg tofu. Nothing too fancy, but nice nevertheless. The accompanying California Maki was bad. It tasted a little milky and watery. A little gross if you ask me. There were no traces of Shark's Fin in the Shark's Fin soup at all. A chewy substitute was used in place of the Fins. Crabmeat was evident though. The soup itself was too starchy and too much of it made me sick. The Sweet and Sour Chilli King Prawn was ok. Note that it's Prawn, not Prawns, as the menu suggests. Served with a small slice of steamed man tou and deep fried man tou, it was of medium size and crunchy. The gravy was sweet but not too spicy.

I've never been a fan of salmon and the Sautéed Salmon Fillet with Teriyaki Sauce was unpleasant to my taste buds. The fishy taste from the Salmon was overpowering and the only saving grace was the Teriyaki Sauce, which strangely, didn't taste like Teriyaki Sauce. It was sweet nevertheless. The Braised Ee Fu Noodles was simply unappetizing. Soft, mushy and pretty tasteless, it has the dubious honour of worst dish of the night. To round things up, the Cream of Red Bean with Gingko Nuts was still acceptable, but a tad too sweet. Tasted like molten candy in some instances. The Gingko nuts tasted funny as well.

With taxes and tea, the final bill came up to $50.80 for 2 pax. Not worth it at all if you ask me. Food is at best average and portions are not very big. But it's filling if you finish all the dishes. An unsatisfying meal for me, but I'll stop short of recommending that it be avoided because it is still a decent enough place, with its ok service and not bad decor. Take your chances I must say. As for me, I won't be back in a hurry. 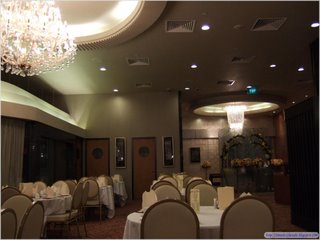 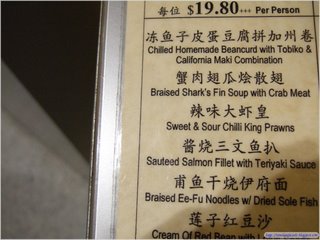 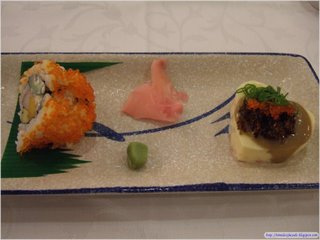 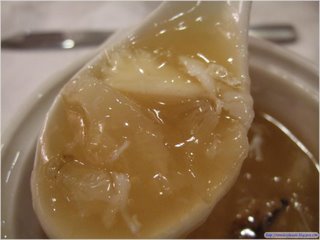 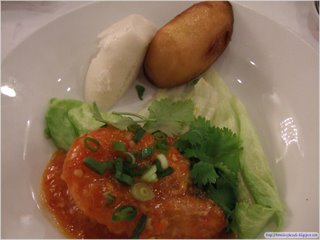 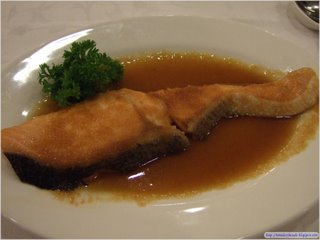 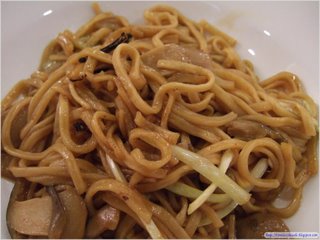 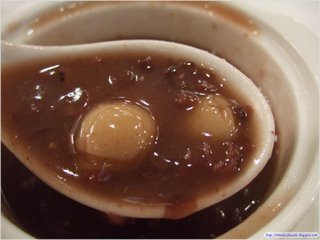 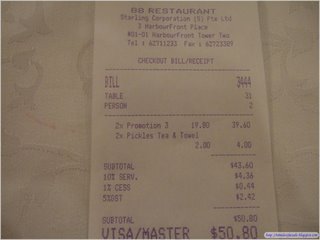